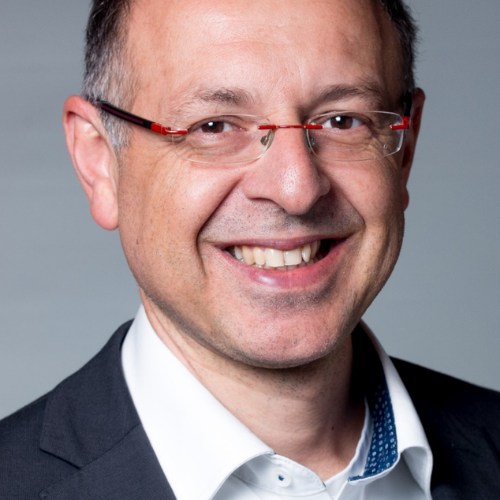 Albrecht Schmidt is professor for Human-Centered Ubiquitous Media in the computer science department of the Ludwig-Maximilians-Universität München in Germany. He studied computer science in Ulm and Manchester and received a PhD from Lancaster University, UK, in 2003. He held several prior academic positions at different universities, including Stuttgart, Cambridge, Duisburg-Essen, and Bonn and also worked as a researcher at the Fraunhofer Institute for Intelligent Analysis and Information Systems (IAIS) and at Microsoft Research in Cambridge.

Over the years, he worked on automotive user interfaces, tangible interaction, interactive public display systems, interaction with large high-resolution screens, and physiological interfaces. Most recently, he focuses on how information technology can provide cognitive and perceptual support to amplify the human mind. To investigate this further, he received in 2016 a ERC grant.

Albrecht has co-chaired several SIGCHI conferences; he is in the editorial board of ACM TOCHI, edits a forum in ACM interactions, a column of human augmentation in IEEE Pervasive, and formerly edited a column on interaction technologies in IEEE Computer. The ACM conferences on tangible and embedded interaction in 2007 and on automotive user interfaces in 2010 were co-founded by him. In 2018 Albrecht was induced into the ACM SIGCH Academy.

The use and development of tools is strongly linked to human evolution and intelligence. Physical tools, from the wheel to the plane and from knifes to production machines, have transformed what people can do and how people live. Currently, we are at the beginning of an even more fundamental transformation fueled by artificial intelligence and autonomous systems: digital tools, with build-in intelligence to amplify human abilities. Such digital technologies will provide us with entirely new opportunities to (1) enhance the perceptual and cognitive abilities of humans and (2) to delegate intermediate decisions and to interact on a different level of granularity. In our research we create novel digital technologies that systematically and empirically explore how to enhance human abilities. We aim at creating an efficient and pleasant cooperation between intelligent systems driven by artificial intelligence and human actors. If such a cooperation is successful, the resulting human-technology-system will outperform the technical system without a human user. Our experimental approach is to: first, understand the users in their context as well as the potential for enhancement. Second, we create innovative interventions based on AI that provide functionality that rethinks the granularity of interaction and provides humans with new powers. And third, we empirically evaluate and quantify the enhancement that is gained by these developments. It is exciting to see how ultimately these new ubiquitous computing technologies have the potential for making human actor measurably. With these technologies we could make humans more powerful, could overcoming fundamental limitations in human perception and cognition and eventually create abilities, currently considers super powers.

All Sessions by Albrecht Schmidt